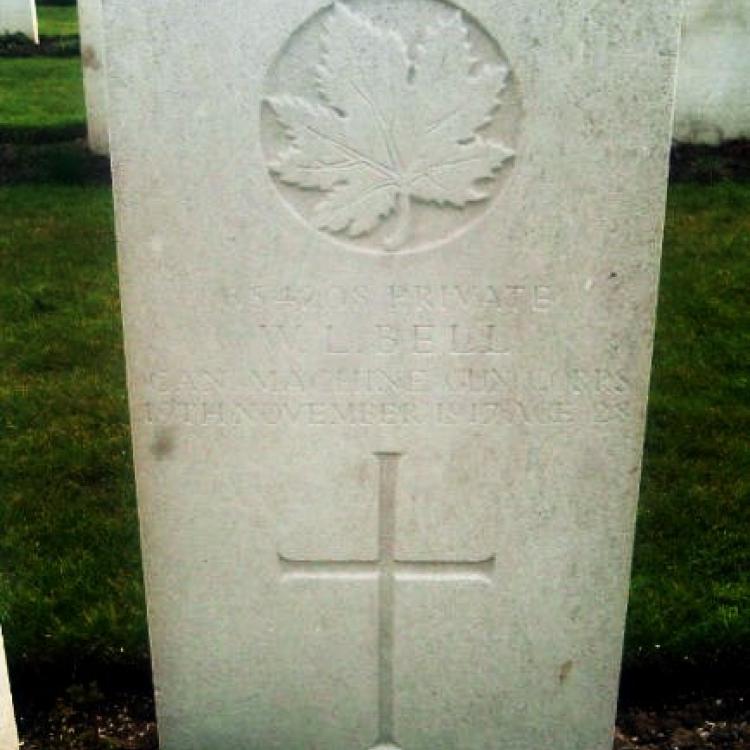 Wilfred Laurier Bell was born in 1891 at Palermo, Ontario, in Halton County, near the present day City of Oakville.  He was the third youngest of nine children born to David and Elizabeth Bell.  Sometime in the late 1890s, the family moved to Goderich, and resided on Britannia Street where his father was employed as a painter and paper hanger.

In 1908, Wilfred served as a cook’s assistant with the 33rd Huron Regiment under his father David, who had acted as the company cook for ten years. Soon after war was declared Wilfred’s brother Victor Milne Bell was the first member of the family to enlist in Walkerton, Ontario with the 34th Battalion.  He was captured in October 1916 and spent the next two years in a German prisoner of war camp.  Within the first three months of 1916, Wilfred, along with his brothers Robert Willis Bell and Russell Milton Bell, both of whom survived the war, enlisted in the 161st Huron Battalion and arrived in England on November 11, 1916.  Wilfred’s father, David, lied about his age and enlisted with the 135th Battalion in Parkhill, Ontario in January 1916.  He arrived in England with his company in August 1916, and served as company cook, until he was discharged due to his age and returned to Canada several months later.

On November 16, 1917, near the Gravenstafel Road, all guns of Private Bell’s brigade were dug in as well as possible as there were no dugouts or pillboxes available.  There were no organized trenches in this area and the front line consisted of a line of posts in organized shell holes.  At 10:30 pm, an SOS was received and the Machine Gun Company answered by firing 19,000 rounds.  The enemy returned fire with shrapnel, high explosive and gas shells.  Casualties reported were 2 killed, 3 wounded and 4 gassed. During this artillery barrage Private Bell was exposed to mustard gas and was admitted to No. 46 Casualty Clearing Station at Mendinghem, Belgium on November 17th.  His condition was reported dangerously ill.  Private Wilfred Laurier Bell died from the effects of mustard gas on November 19, 1917.