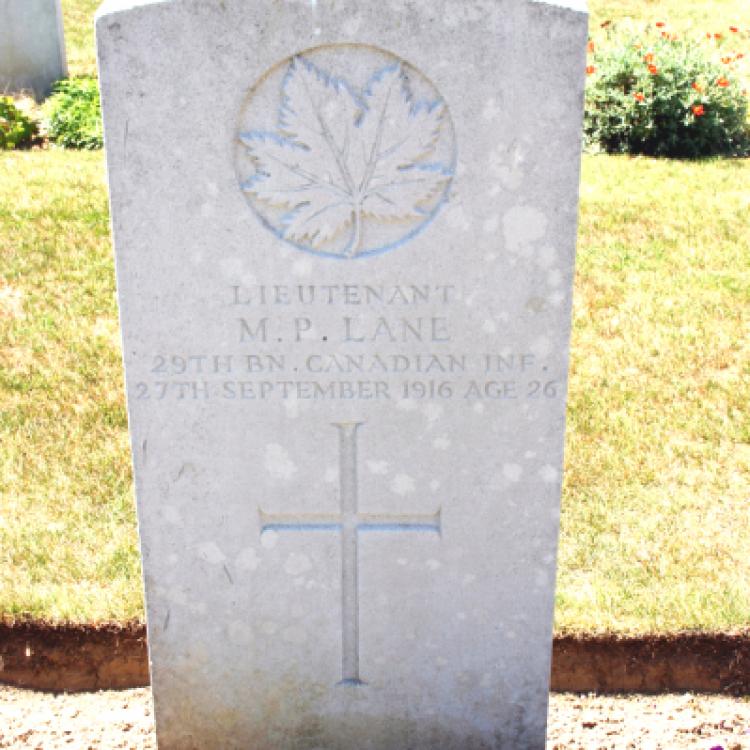 Hello. Mainland Percival Lane was my great uncle. He was born in Dungannon, Huron County in 1888. He signed up for WW1 in 1915 at Revelstoke BC while on assignment there for the Imperial Bank of Canada, joining the 54th Battalion (Kootenay Regiment) and commissioned as a Lieutenant. He was reassigned to the 29th Battalion (British Columbia Regiment) while in England and was shipped to France in April 1916. The 29th was part of the 2nd Cdn Division, which along with the rest of the Cdn Corps held the line in the Ypres Salient through the summer of 1916 before being transferred to the Somme front in September to relieve the Australians. He was killed during an offensive near Courcelette on Sept 27, 1916 and is buried at the CWGC Sunken Road Cemetery near Contalmaison. His father was William Lane, a county court clerk in Goderich, and his grandfather was William Lane, farmer, who emigrated from Devon, England and took up farming in Ashfield Township in the early 1850’s with several of his sons near Lanesville. Maitland Percival Lane is recorded on the WWI/II memorial obelisk in Revelstoke BC, and on the CIBC’s Revelstoke Branch « In Memorium » plaque, currently held at the Revelstoke museum. I have photos of Lt. Lane, newspaper obits from 1916, and photos of his gave, if you are interested. Cheers and best regards, Stuart Lane, Comox, BC.

This soldier arrived in England in late November 1915. In early February 1916 he completed the 4th Pioneer Course and a grenade course. He then transferred to the 29th Battalion, goes into France and joins his unit already in the field on June 8th and completes a second grenade course. In the month of September he completes a Lewis Gun training course.
On September 26th, the end Division advanced out of the village of Courcelette and moved north searching for enemy weak points but with only some success. The next day September 27, 1916 the 2nd Division found the Germans had retreated to Regina Trench and left the town cemetery and the high points north of the village to the Canadians. The fighting was non stop and the enemy artillery knew the positions of the Canadians and threw their artillery onto these positions.
During the day of September 26th the enemy was active sniping at the Battalion front lines but the 31st on the right had relieved the pressure there as they had obtained their objective. At 1 pm the Brigade barrage began and the advance went forward to the objective which was the enemy front lines. This objective was obtained and an advance post was established about 100 yards further out. The 31st Battalion was held up by enemy wire and machine-gun fire and would take their objective the next day. The 28th was ordered not to advance because their support tank had broken down. The 29th would have to hold their positions and were taking heavy enemy machine-gun fire and sniper fire. By 6 pm it had been reported the front was clear of the enemy who had retreated about 1,000 yards.
During the night and into the morning the enemy continued sniping. By mid day of September  27th the 6th Infantry Brigade losses were 64 men killed, 210 wounded and 109 missing. They were also now able to begin removing the wounded for medical care.
By 6 pm the 29th reported that the enemy was not in their previous positions between the Baupaume Road and the Courcelette Trench. The Battalion placed posts in the north and south Practice Trenches in front of them denying the enemy of using them.
Lieutenant Lane was in the trenches with his men north of Courcelette when he was struck by an enemy sniper bullet and died instantly from his wounds.