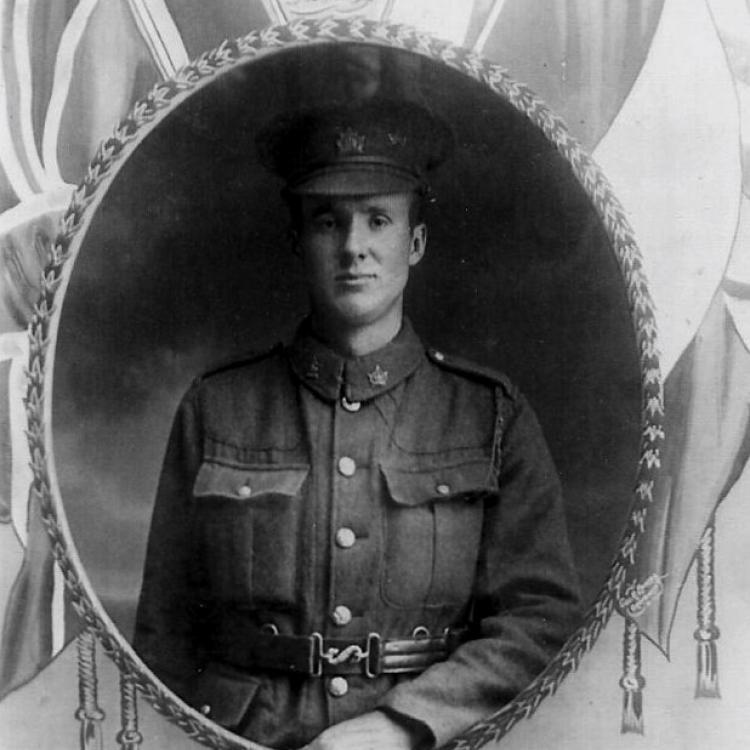 Private Hicks departed from the Port of Halifax on April 1, 1916 and the S.S. Olympic arrived in Liverpool on April 11, 1916. And the end of May he transferred to the 10th Brigade Trench Mortat Battery. On August 5, he transfers to the 47th Battalion and on August 10th he proceeds overseas into France. On or about August 11, 1916 was when he joined his unit in the field.
Corporal Hicks was leading the men of his platoon during an attack on Valienciennes on November 1st when he was very seriously wounded in the hip and abdomen from enemy machine gun fire. He and his men were just north- west of the village of Aulnoy. A nearby stretcher bearer gave him aid and he was immediately taken to his Regimental Aid Post. He was then moved to No. 1 British Casualty Clearing Station - Escaudoeuvres the following day and it was here he lost his fight for life.
Prior to 5:15 am when the artillery of the 10th Brigade opened up the 46th had endured an enemy artillery barrage of gas and high explosives. The 44th would concentrate on clearing Aulnoy and Mont Huoy with the 46th mopping up and they were determined that their artillery barrage would continue. The mopping up would be most difficult along the roads running obliquely along the line of advance. The “mopping up party” was formed from batmen, cooks, bandsmen along with the odds and sods”. The attack went in with the 44th up against heavy enemy machine-gun fire and the farther they advanced the more the resistance grew. Officially the 46th was not yet in action but at the front it was a much different story with heavy fighting along the Famars-Valenciennes and Aulnoy -Marly roads and the work being done was deadly. Many of the enemy were being killed by parties of the 46th who had bayonets, bombs and Lewis guns. The area was packed with the enmy and in every cellar there was some of the enemy. At one point the infantry of the 46th had to deal with the effects of an enemy gun point blank, along with trench mortars and machine guns but they disposed of the enemy and took prisoners. At another point the flank was overwhelmed but a platoon saved the situation.
“A” Company ran into problems about 400 yards from Aulnoy and took heavy casualties. “C” Company then moved around the flank and silenced the enemy machine-gunners. Now the remaining men from both “A & B” Companies were mixed with the 44th Battalion.
Then the leap frog line was reached and the 46th were on their own and all that remained of the battalion was 300 men and they were to attack frontally against a well-protected enemy numbering in the thousands. During the advance the enemy machine-gun fire was murderous, the enemy was dug in at certain points. However, by 9am all Companies had their objectives.
When the fifteen minute barrage on the enemy positions lifted, the 46th went “over the top”. Heavy enemy fire was met but they advanced and eliminated the source of the fire. In the brickfield south of Marly opposition was met and here the barrage had not touched the enemy and a flanking move on the right caused such sever enemy casualties, the remaining enemy surrendered.
By 9:00 am all of the Companies were on their objectives
Valenciennes on November 1st cost the enemy 1,800 prisoners, 900 dead.  The 46th lost 80 men killed and 300 wounded and at 50% strength the 46th Battalion had suffered 1/3 of the Canadian casualties.
The 46th Battalion became known as the “Suicide Battalion” and was awarded 16 battle honours during its 27 months in the field. Their casualty rate was 91.5% with 1,433 men losing their lives and 3,484 men being wounded.