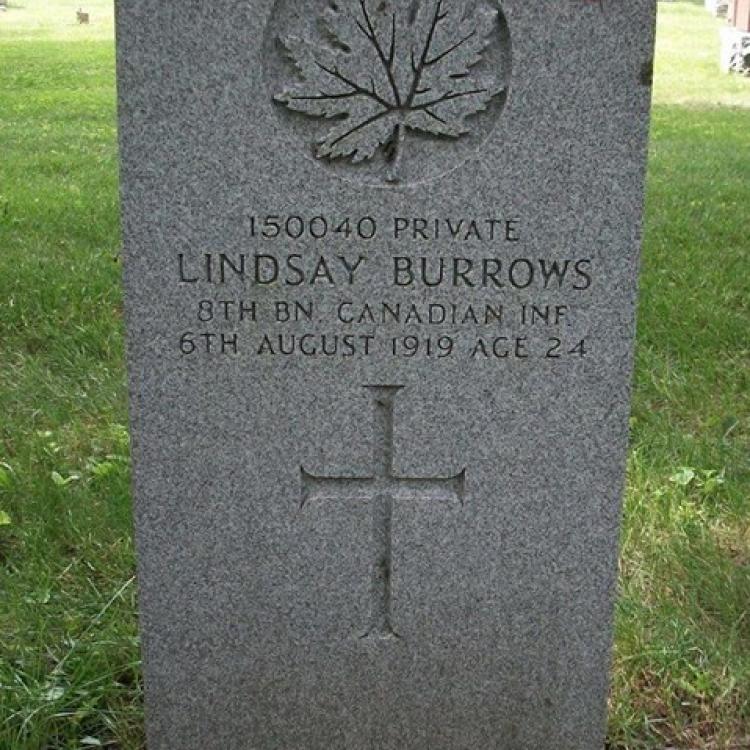 Private Burrows enlisted to serve his country in 1915, survived the war and returned home to Canada. However, like so many other men, he suffered severe medical issues while in the field in Belgium. He contacted tuberculosis overseas and died at the Queen Alexandra Sanitorium located in London, Ontario.
Private Burrows left Canada on September 25, 1915 from Montreal on the SS Corsican and arrived on October 5, 1915.
On June 14, 1916 in the Ouderdon area near Ypres Private Burrows received a bullet wound which entered his chest, knocking him down and he immediately was spitting blood. He mentioned that he was very short of breath and walked approximately a mile towards the Dressing Station and collapsed. He was carried to the Dressing Station about 6 hours later.
While at the Dressing Station near Poperinghe he was propped up in bed with severe liver pain and a severe cough.
He was at the Anglo American Hospital in Boulogne and was unable to lie down because of shortness of breath. The time period was June 18th to July 2, 1916.
He was at Seymour Park in Manchester drom July 2, 1916 to September 15, 1916 and the X Rays showed the bullet in his liver.
Private Burrows returned to Canada departing Liverpool on the SS Metagama on December 15, 1916 He was moved to a convalescent home in London on December 25, 1916. On June 20th, 1917 the Medical board recommends continuing his treatment for another three months.
Private Burrows was discharged from the Canadian Expeditionary Force on July 26, 1918 as he was medically unfit to serve further.
During the day of August 6, 1919 Private Burrows died from the effects of his wounds received and from the resulting Tuberculosis and was brought home to Goderich to be buried.