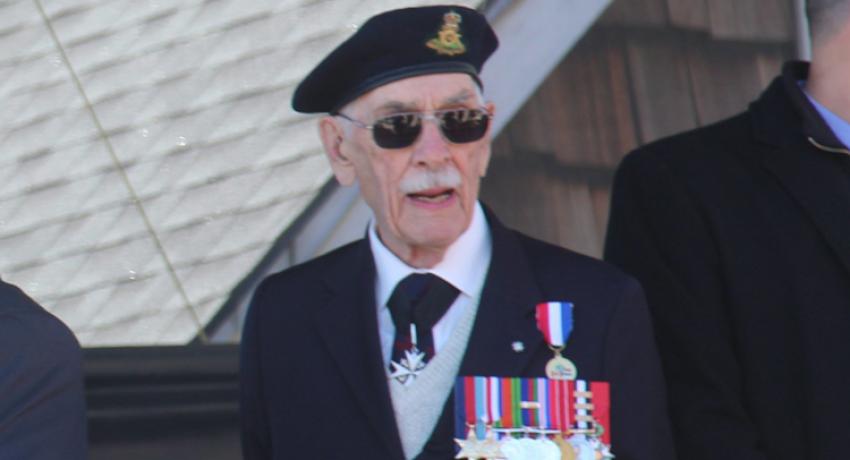 Mr. Bill Anderson who resides in Goderich is a World War II veteran and is one of 39 remaining veterans to have the honour of returning to Juno Beach on the 75th Anniversary of the D Day landings. Bill will be representing his country and his comrades as well as all of the veterans who took part in the landings.

I first met Bill in 2004 on a committee that was planning a large event in Goderich for the Canadian Government initiative to name 2005 as The Year of the Veteran. Our committee worked together with the Dutch-Canadian Committee to make the celebrations in Goderich a success. They were! We were told by Veterans Affairs Canada that we had held one of the largest celebrations in Canada.

Then, in 2009 Bill assisted me in the launch of my book The Men of Huron / A Book of Honour and Remembrance /  1939-1946. Following the first book,I immediately began to write the second book about World War I, and my co-author Jeanette Elliott and I have been working on that effort since 2010.

During this work, an idea came to a colleague and I that perhaps we could invite Her Royal Highness Princess Margriet and her husband Professor Pieter van Vollenhoven to come to Goderich to honour and remember with us the men who are resting in the cemeteries of the Netherlands. We were successful in our efforts, and in May of 2017 Her Royal Highness signed a commemorative scroll and unveiled a plaque at Liberation Memorial Park In Goderich. I was very honoured to ask Bill to join us in this event and he had the privilege of meeting both Her Royal Highness and Professor van Vollenhoven. There was very good conversation between them.

This man deserves our gratitude for the sacrifices he made to make Canada a free and democratic country.

Bill's friend Nancy Boucher who will be travelling with Bill to France felt it was important to get as many of our remaining Canadian veterans onto Juno Beach as possible. Veterans Affairs Canada agreed.

Nancy feels there will stories to be told as these honoured souls gather at Juno Beach and she will. I am quite sure be bringing back her own thoughts.

Lieutenant Anderson served with the 5th Anti-Tank Regiment which was part of the 4th Canadian Armoured Division. The Division arrived in Normandy in July 1944 and was involved in action in France from Caen to the Falaise Pocket. The Division then saw service in Belgium, in the Netherlands and finally in Germany.

Recently, I returned from a European trip that took us to France, Belgium, the Netherlands and Germany. We followed the Canadians from their landings at Juno to where they ended the war in the Netherlands and Germany. We followed the 4th Canadian Armoured Division which the 5th Anti-Tank Regiment was attacked to, the 1st Hussars, The Toronto Scottish and the Governor General's Foot Guards.

When one goes to war, you see and witness events that you would rather forget and these feeling and memories in my view never leave you and since the war has ended the majority of the men never spoke about what they experienced. There was a minority who did choose to speak about their experiences and I believe that having done so has helped them to carry on with their lives in a more positive manner.

Bill, witnessed death and savagery and all the while he was leading his men trying to keep them and himself alive to continue another day.

As a friend, I respect and admire this man. He is a gentleman and has carried himself with dignity.

Today, remaining veterans speak at schools about what they experienced and what the students must do in the years ahead to keep this country free and democratic. It is I believe good for the soul of Bill Anderson and for the students to hear first hand about what war is like.

There have been generations since the war both young and old and they must be made aware just what men like Bill did for his fellow Canadians.

Every Canadian must honour and remember Canada's fallen so that we Canadians do not become more complacent than we already are. We must always be vigilant as to what is taking place in this country and around the globe to ensure we always remain a free and democratic society.

I am looking forward to adding to this article following Bill and Nancy's return from Normandy.