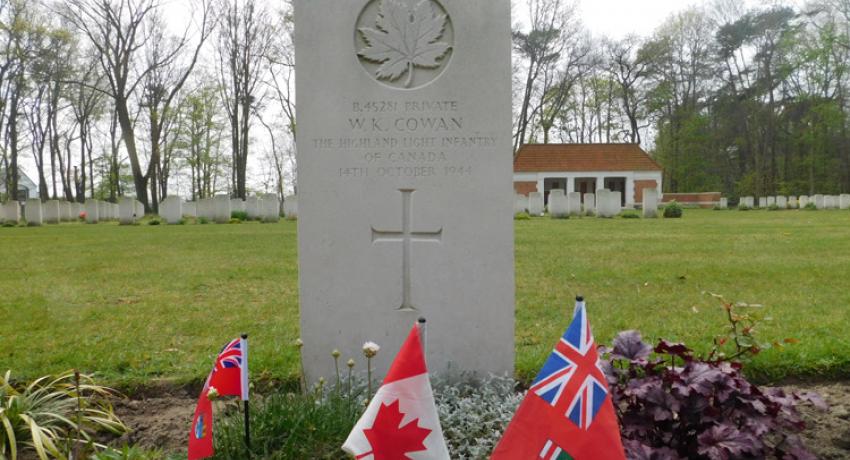 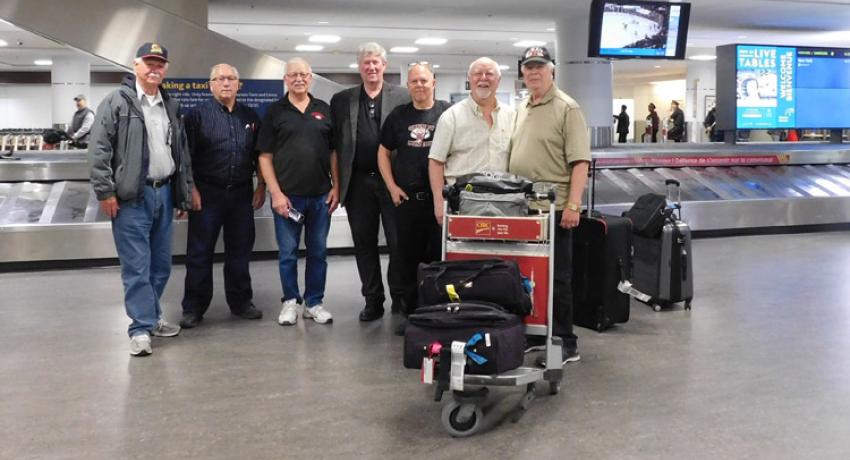 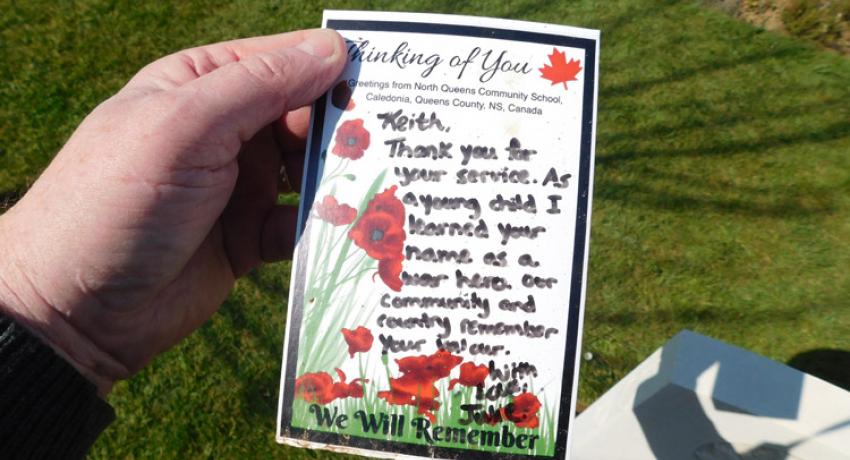 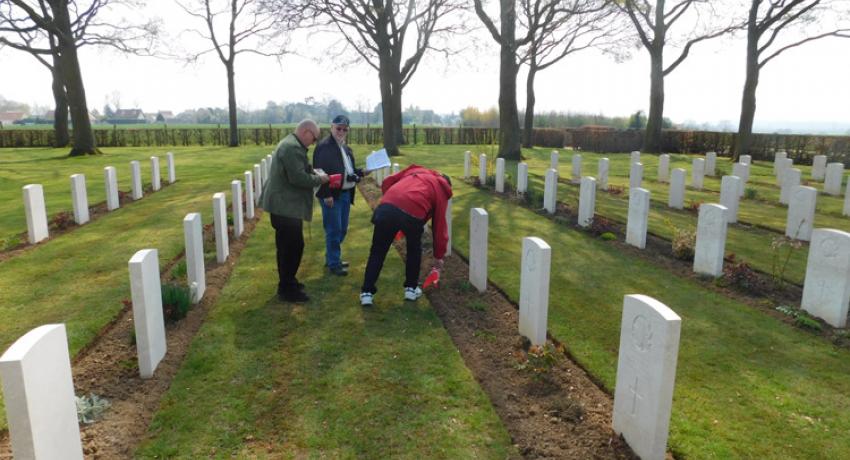 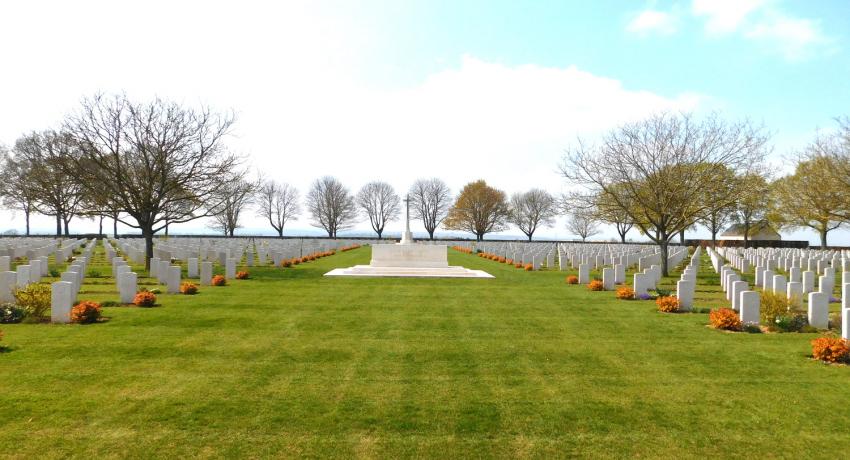 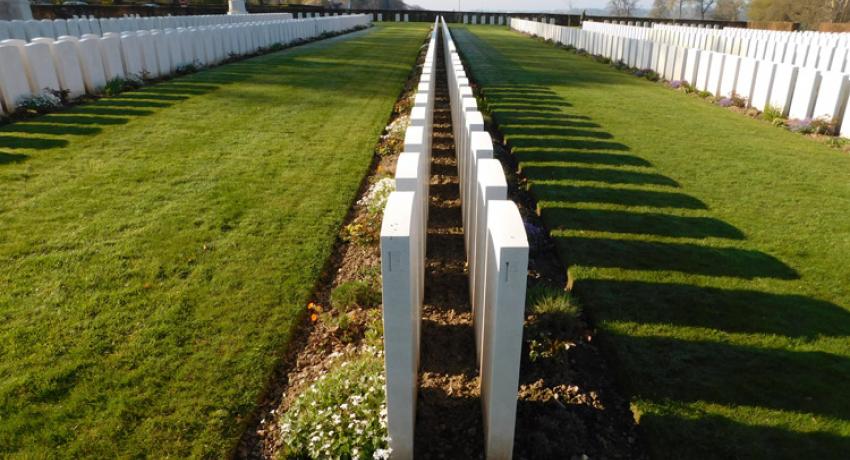 Recently, I took a group of men who are interested in the history of the First and Second World Wars to Europe for 17 days. We called ourselves "the magnificent seven". Some of the group had been overseas a number of times previously and some had never experienced the emotions of what our Canadians sacrificed and died for.

We followed the Canadians from their landing at Juno Beach in Normany and then through France, Belgium, the Netherlands and ended our journey in northern Germany where the Canadians were fighting when the Second World War ended. As well we visited the seaside city of Dieppe, and it was here the Canadians suffered massive casualties in 1942.

The majority of our time overseas was covering World War II but we did spend 3 days at the sites where the Canadian Corps fought during World War I at such places as the Somme, in French and Belgian Flanders, at Vimy Ridge, at the Menin Gate in Ypres Belgium and at Passchendaele in Belgium.

Our group bonded very well together and there were tears, very strong emotions and we all left these sites in awe of what our Canadians accomplished. We all believe we cannot and must not ever forget what our Canadians sacrificed. They volunteered and fought for something they all believed in so we can live in our Country of Canada in peace, in freedom and in a democracy and what they gave must endure for all time by honouring our fallen and by remembering our fallen. We must never forget.

Canadian fallen lie at rest in cemeteries across Europe maintained by the Commonwealth War Graves Commission of which Canada is a part. They honour and remember the 1.7 million men and women who fell defending the British Commonwealth and the world. They maintain cemeteries and burial sites at over 23,000 locations in 150 countries and territories around the world. The largest cemetery in Belgium has 12,000 men resting there and the smallest is Ocracoke Island in North Carolina, United States where 4 men are resting.

There are 2,945 Commonwealth cemeteries or locations in France, 624 in Belgium, 476 in the Netherlands and 51 in Germany.

These cemeteries are respected by the locals and in many cases our Canadians resting at these locations in France, Belgium and the Netherlands are their boys and they as well tend to the Canadian graves. They are meticulously kept with the grass always mowed and the flowers and shrubbery in perfect order. The grass is kept for a period of time before it is replaced. Each cemetery or location is surrounded by a wall or hedge to maintain the feeling of peace at these sites. It has been said many times over the years that the Commonwealth cemeteries are the most emotional and moving when one visits.

Not all of our Canadian men and women have a headstone as many are still missing and these souls are honoured and remembered at a memorial where their names are etched into the panels at a particular site. At the Vimy Memorial 11,285 Canadians are named, and at the Menin Gatein Ypres 55,000 men are named and of this number 6,927 are Canadian. These men are still in the fields of Flanders and the Somme. These 18,212 men and women are not forgotten and are honoured and remembered for their sacrifice.

When you visit a Commonwealth War Graves Cemetery it seems that at any part of the day there are people in these cemeteries visiting a loved one or just visiting to pay their respects to the Canadian fallen.

The German War Graves Commission tends to 833 military cemeteries in 46 countries in Europe and North Africa which contain approximately 2.7 million war dead. Now, since the collapse of the Cold War and Soviet Union the Commission now has access to Eastern Europe. The Commission searches for war casualties and when found move them to cemeteries in eastern and western Europe as well as in Germany. In 2017, 27,449 members of the German military were exhumed.

In the two decades since the fall of the Iron Curtain and Soviet Union in late 1989 over 700,000 German soldiers have been found, identified and reburied and this number increases by approximately 40,000 annually.

Our group while in France visited Neuville-St Vaast German War Cemetery which holds 44,383 soldiers from World War I. The cemetery as a whole was not kept well and in parts of the cemetery there were large concrete Iron Crosses and they sat over large mass graves. The crosses on the graves were made of some kind of metal and in this cemetery there are two men below a cross and are resting back to back. Each is covering the back of the other.

We wanted to visit a German World War II military cemetery but were unable to do so. There was a German military cemetery in the Netherlands by Eindhoven but due to our itinerary we could not visit. This cemetery has 31,513 men. We wanted to see the difference between a cemetery from World War I and World War II. I did some research and the main difference is the size of the crosses from World War I. World War I German cemeteries seem to have a much smaller cross whereas the German World War II cemeteries have a much larger and heavier cross made of dark concrete or marble. In addition another huge difference was there were no flowers or shrubbery planted amongst the graves as is the case in the Commonwealth War Cemeteries. The German cemeteries are very dark and very sombre.

As one who is interested in our Canadian military overseas and who has traveled through Europe, I have noticed that German cemeteries are scarce. Most German losses in both World Wars took place on soil other than German soil. The majority either ended up is mass graves or unmarked burial sites near where they would have fallen.

A question has been asked which is "how does the losing side in two World Wars and who was the aggressor in both conflicts remember and honour their fallen. Or do they?

Apparently, in the southern regions of Germany many families have no physical remains of their loved ones and as such have added monuments and gravestones to area cemeteries with the names listed as missing. Many graves have ceramic photographs of the fallen along with their name, age and where they died. Here, the ages from 1943-1945 became younger and younger.

The majority of the German military was very similar to our Canadians in the fact they did not want to be fighting in a war that they knew very little about. It was the minority that was fanatical and in a frenzy to destroy our world. In my opinion, the ordinary German soldier who fell in battle deserves to be in the least remembered.